Border collie is a healthy breed, but you can never forget to be care if you would like to buy a puppy. If you would like a healthy puppy, who will be a family member for a long time, you should care for the followings:
-Never buy a puppy from a  breeder, who has always puppies for sale!
-Never buy a puppy without papers! You have to get pedigree, pet passport or  vaccine book, microchip and at least one vaccine (preferred to have 2) before the puppy left the breeder at the age of 8 weeks!
-Parents must have tested for hips! Now we test for elbows and OCD as well! If all dogs has A result, be careful, it is impossible to breed only dogs with A hips. A,B or C result is even very good.
-Parents are tested for or have clear by parentage result for TNS, NCl and CEA is a MUST!
-More DNA tests are available and suggested before breeding like: MDR1 (multi drug sensitivity), SN and IGS-altough not too much border collies are affected, a stud dog should be tested.
-Clinical eye examination: there are some special eye illnesses what we can not test from blood. In this way we can do only clinical tests: PRA, CEA, entropium, ectropium, glaucoma
-Be careful with glaucoma. It is sadly well known in border collies. We do not know too much about this illness, it can be primary and secondary from, can be inherited.

About the illnesses:
Collies share Collie Eye Anomaly (CEA) with several other breeds – it’s not just a problem for collies. CEA is more technically known as Choroidal Hypoplasia (CH). It is a recessively inherited eye disorder that causes abnormal development of the choroid - an important layer of tissue under the retina of the eye. This disease is seen most frequently in U.S. collies, but also worldwide in Rough and Smooth Collies, Border Collies, Australian Shepherds, Lancashire Heelers, and Shetland Sheepdogs. Since the choroid layer does not develop normally from the start, the primary abnormality can be diagnosed at a very young age. Regrettably, there is no treatment or cure for CEA.
The symptoms and signs – the clinical phenotype – can vary greatly among affected dogs within one breed, between parent and offspring and even within a litter. This creates a difficult situation for the breeder. Learning about the genetic cause and the course of the disease will help you understand how to manage it better and eventually avoid it altogether with genetic testing.
The primary problem is choroidal hypoplasia (CH). There is under-development (hypoplasia) of the eye tissue layer called the choroid. The choroid appears pale and thin, almost transparent, and the blood vessels of the choroid can easily be recognized in those “thin” areas. The ophthalmologist, looking at the back of the eye (the fundus) with an ophthalmoscope, typically will see an area of choroidal thinning that appears like a “window” to the underlying vessels and sclera.
MILD disease: Mild disease is very common in U.S. collies and is present in the other breeds named above. It is easily recognizable on careful ophthalmologic examination as early as 5 to 8 weeks of age. The lesion appears as an area lateral (temporal) to the optic disc with reduction or absence of pigment so that the underlying vessels of the choroid are seen. The choroidal vessels may be reduced in number and of abnormal shape. The underlying white sclera might also be visible. Once the retina changes to its adult color around 3 months of age, the normal pigment sometimes masks the changes in the choroid (so-called “go normal” – read more below). In mildly affected dogs, choroidal thinning is the only detectable abnormality and the dog retains normal vision throughout life. However, dogs with mild disease can produce severely affected offspring.
(The eye anomaly “merle” can be confused with choroidal hypoplasia, primarily in dogs from merle to merle breeding and whose coat color is whiter than their littermates. Although both conditions are inherited, can occur in the same breed and exhibit a range of fundus anomalies, there are sufficient dissimilarities for the ophthalmologist to make the distinction.)
SEVERE disease: In severely affected dogs, approximately 25% of dogs with CEA/CH, there are related problems with the health of the eye that can result in serious vision loss in some cases. Colobomas are seen at and near the optic nerve head as outpouchings or “pits” in the eye tissue layers. Colobomas can lead to secondary complications such as partial or complete retinal detachments and/or growth of new but abnormal blood vessels with hemorrhage – bleeding inside the eye. This happens in 5-10% of dogs with CEA/CH, generally by 2 years of age, and can affect either one or both eyes. Complications of severe disease can lead to vision loss, although this disorder only rarely threatens total blindness.
CEA/CH is not progressive in the usual sense. The essential features, choroidal hypoplasia and coloboma, are congenital – the abnormalities develop as the eye develops. These features are also stationary once ocular development is complete around 8-12 weeks of life. Retinal detachments and/or aberrant vessel formation can be congenital or develop later, in general only in eyes with colobomas.
Source: OPTIGEN

CL
The OptiGen CL test is a DNA-based test that provides a method to identify the Border Collie neuronal ceroid lipofuscinosis disease gene, commonly referred to as CL, inherited as a recessive genetic defect. This test allows you to control the CL gene frequency in your line so you can prevent producing puppies affected with the disease. Among lines of Australian descent, it is estimated that up to 3% of Border Collies are carriers and about 1 in 1000 matings will produce affected pups.

Neuronal ceroid lipofuscinosis is a type of lysosomal storage disorder that results in accumulation of lysosomal storage bodies in the cells of many tissues of the affected animal. This leads to progressive neurodegeneration (degeneration of brain and eye cells) and results in severe neurological impairment and early death. Affected dogs appear normal at birth, but begin to exhibit symptoms early in life – around 1- 2 years of age. The age of onset and severity of the disease can vary greatly among individuals. The symptoms include progressive motor decline with seizures and loss of coordinated muscle movements, cognitive decline and abnormal behavior. Visual impairment may occur. Due to the severity of the disease, affected Border Collies rarely survive beyond 26-28 months. There is no treatment or cure at this time.


TNS stands for Trapped Neutrophil Syndrome, an hereditary disease where the bone marrow produces neutrophils (white cells) but is unable to effectively release them into the bloodstream. Affected puppies have an impaired immune system and will eventually die from infections they cannot fight.
Once thought to be rare, it is now believed that the disease goes undiagnosed for several reasons.  First, not very many veterinarians know about the disease to look for it.  Second, even when looking, blood counts do not always show lower than normal neutrophil (white blood cell) counts. Finally, because it is an autoimmune-deficiency disease, young puppies present a variety of symptoms depending upon what infections they fall prone to. Thus many cases are not properly diagnosed and have just been thought to be "fading puppies".
Making the diagnosis even more difficult is the fact that age of onset varies depending on which infection is involved at the time.  Most puppies become ill before leaving the breeder but some do not have symptoms until later. The oldest known survivor was 2 years 8 months.  Most affected puppies die or are euthanized by about 4 months of age.
The research now suggests that the gene is widespread throughout the Border Collie breed.
TNS cases have been positively diagnosed in Australia, Great Britain, Hungary, the Netherlands, New Zealand, and the United States.
TNS carriers have been identified in lines not related to the Australian and New Zealand lines where the disease was first identified - including 100% ISDS lines.
It is autosomal recessive, which means that both parents have to be carriers to produce an affected puppy.
Source: www.bordercolliehealth.com

At this point in time, no one knows exactly what causes dog hip dysplasia, but most vets now agree that dog hip dysplasia is probably an inherited condition. They also agree that the dog hip dysplasia probably isn't influenced by a dog's diet, although dog hip dysplasia is aggravated by excessive weight and obesity problems. They suspect that the animal's overall weight and/or very rapid growth during puppyhood may be contributing factors for dog hip dysplasia.
We can strengten the joint and sinew by feeding extra C vitamin. The extra dosis Ca is very dangerous too, becasue the less Ca can be utilized in 100%, but the redundant Ca phases out phosfor from the body.
Source: www.dogcathealthandmore.com 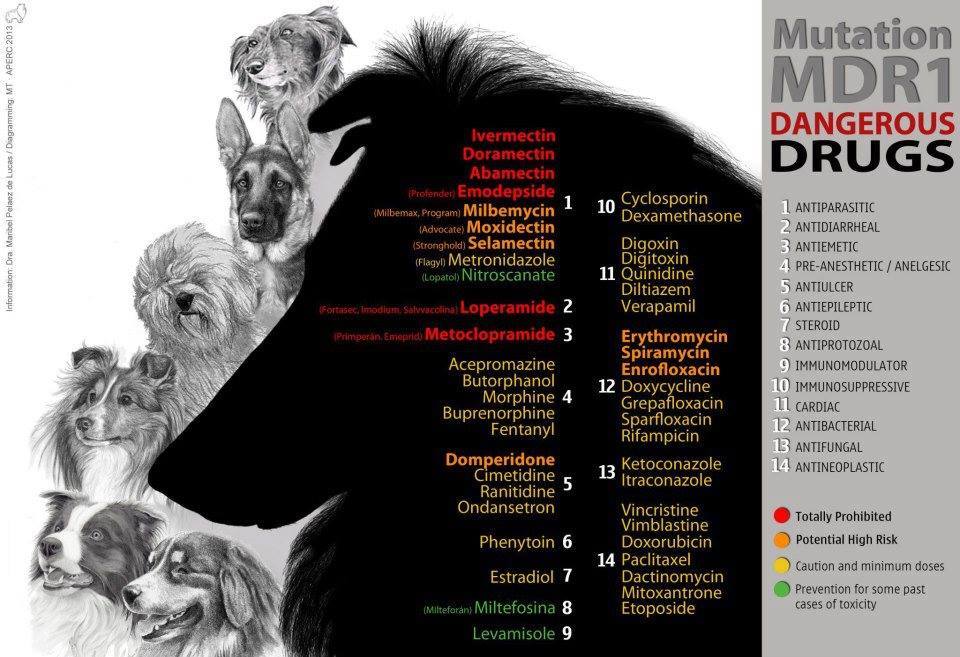